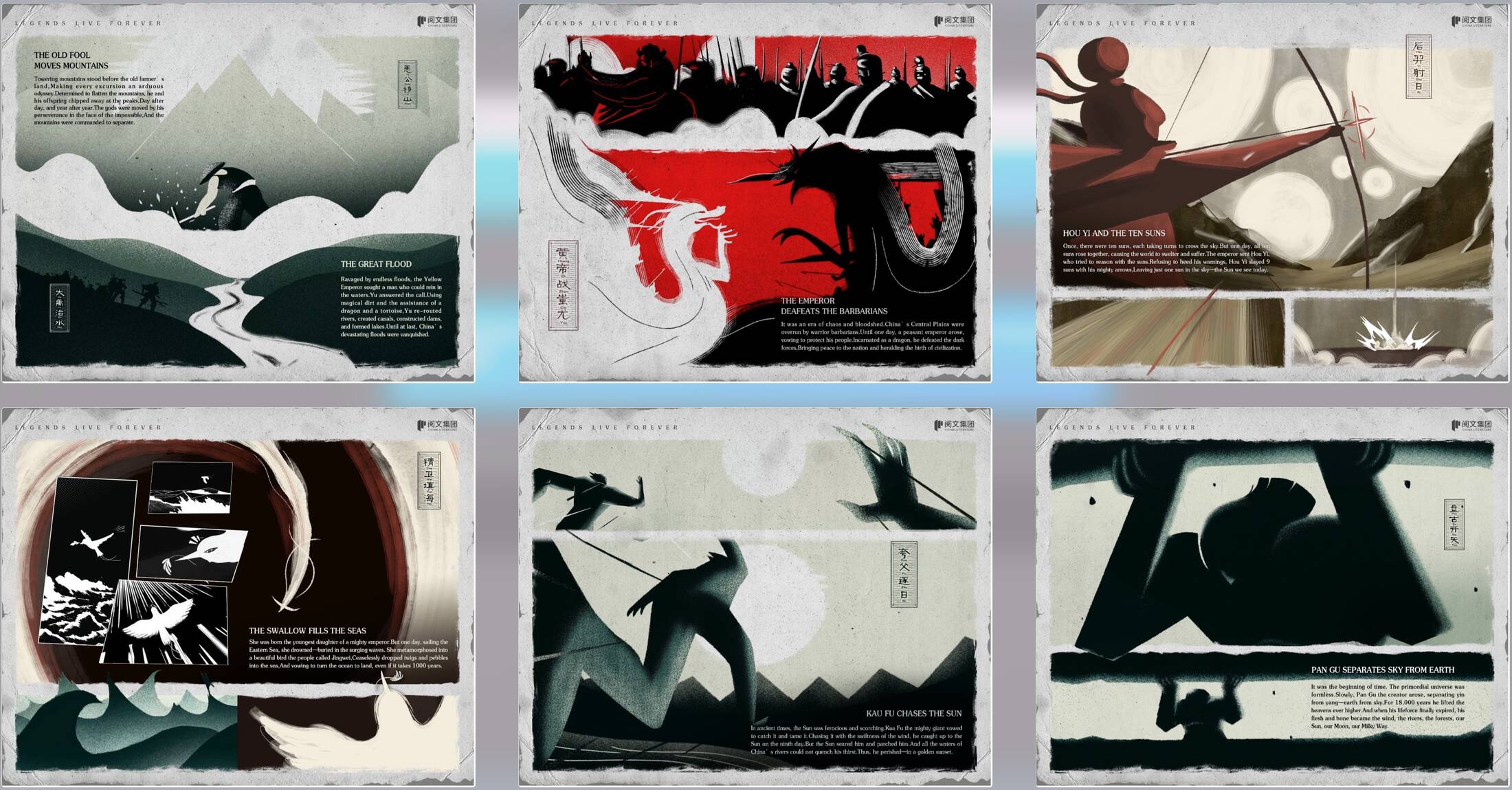 1.PAN GU SEPARATES SKY FROM EARTH It was the beginning of time. The primordial universe was formless. Slowly, Pan Gu the creator arose, separating yin from yang—earth from sky. For 18,000 years he lifted the heavens ever higher. And when his lifeforce finally expired, his flesh and bone became the wind, the rivers, the forests, our Sun, our Moon, our Milky Way. 2.KUA FU CHASES THE SUN In ancient times, the Sun was ferocious and scorching. Kua Fu the mighty giant vowed to catch it and tame it. Chasing it with the swiftness of the wind, he caught up to the Sun on the ninth day. But the Sun seared him and parched him. And all the waters of China’s rivers could not quench his thirst. Thus, he perished—in a golden sunset. 3.THE SWALLOW FILLS THE SEAS She was born the youngest daughter of a mighty emperor. But one day, sailing the Eastern Sea, she drowned—buried in the surging waves. She metamorphosed into a beautiful bird the people called Jingwei, Ceaselessly dropped twigs and pebbles into the sea, And vowing to turn the ocean to land, even if it takes 1000 years. 4.HOU YI AND THE TEN SUNS Once, there were ten suns, each taking turns to cross the sky. But one day, all ten suns rose together, causing the world to swelter and suffer. The emperor sent Hou Yi, who tried to reason with the suns. Refusing to heed his warnings, Hou Yi slayed 9 suns with his mighty arrows, Leaving just one sun in the sky—the Sun we see today. 5.THE EMPEROR DEAFEATS THE BARBARIANS It was an era of chaos and bloodshed. China’s Central Plains were overrun by warrior barbarians. Until one day, a peasant emperor arose, vowing to protect his people. Incarnated as a dragon, he defeated the dark forces, Bringing peace to the nation and heralding the birth of civilization. 6.THE OLD FOOL MOVES MOUNTAINS Towering mountains stood before the old farmer’s land, Making every excursion an arduous odyssey. Determined to flatten the mountains, he and his offspring chipped away at the peaks, Day after day, and year after year. The gods were moved by his perseverance in the face of the impossible, And the mountains were commanded to separate.

What happened if stories don’t get told anymore… they disappear… this is why it’s important even in our more globalized society to share the stories that has been told from generations to generations. They are a big part of every nation identity, without the legendary stories being told we miss a part of our souls as a country.

The rise of online culture has brought a wealth of information and entertainment. But it has also diluted interest and knowledge of some of the most important aspects of Chinese cultural, including arts and literature.

Yue Wen — a platform dedicated to promoting classic literature—believes that ‘good stories never die.’ That’s especially true for the classic tales that have carried on China’s cultural values for over five thousand years and served as a beacon for those seeking a cultural compass.

That’s why Yue Wen breathed new life into 7 classic legends from the ancient text, ‘Classic of Mountains and Seas’ turning traditional myths into modern works. Combining the DNA of classic Chinese art aesthetics with modern art styles, we demonstrated the endless possibilities for classic literature to be transformed into contemporary works.

Reviving Classic of Mountains and Seas in a unique animation style, we brought classic Chinese literature to a new audience, and brought more readers to important classic works. Best of all, we inspired readers to create their own reimagined and newly expressed classic tales. In the process, we created an opportunity to attract more people to discover and interact with Chinese tradition, helped build a stronger national identity, and allowed the power of words to enter a new cycle of dissemination.

This professional campaign titled 'Legends Lives Forever, 中國神話故事' was published in China in January, 2022. It was created for the brands: Tencent and Yue Wen Literature Platform, by ad agency: Tencent in House. This Film medium campaign is related to the Education and Movies industries and contains 2 media assets. It was submitted 3 months ago by Project Manager: Roy of Tencent.