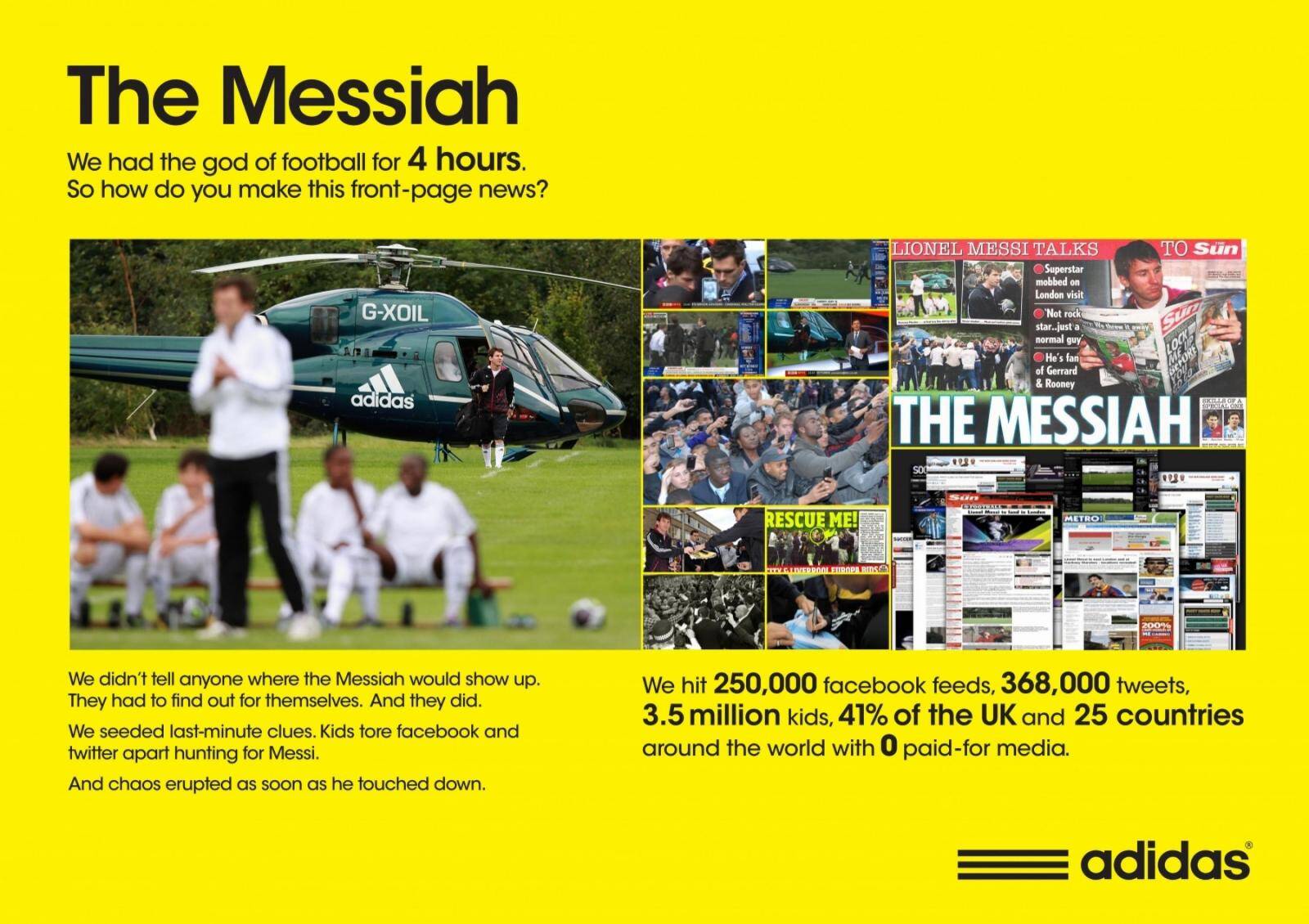 Adidas came to us with a big challenge: reach the active football-crazed kids (males, 14-19yrs old) who aren’t sitting in from of their TVs. So, we brought the world’s most famous football player, Barcelona’s Lionel Messi, to London. With only four hours allotted, we skipped a TV spot endorsement idea and unleashed him to the public via an adidas-branded helicopter. In the weeks leading up to his arrival, we seeded content and cryptic messages online, hinting where Messi would be. The first stop was Hackney Marshes where local teams were in the midst of a game. The second was Brick Lane in East London where we held an on-street “kit amnesty”. Here fans were able to trade in their old boots for new F50 adizeros whilst shaking hands with Messi. Thousands took photos and videos and shared it throughout the web. We hit 250,000 Facebook feeds, 368,000 tweets, 3.5 million kids and 41% of the UK. And, all this with zero paid-for media.Proof that a unique idea can earn more media than a pre-planned schedule can ever buy.
Brief: We wanted to credit adidas with bringing the world’s best footballer, Lionel Messi, to his fans in a way that would create huge ‘social buzz’, talk and news. Research indicated that this audience was notoriously hard to engage and impress through standard media channels; real life experiences and events are much more appealing to them because they can provide first hand participative experiences that can be used as social currency amongst their peers/ friends.
Results:
Within 24hrs we communicated that Messi wears adidas, earned the respect of thousands of our core audience and reached 41% of the UK population, with zero paid-for media.
• 250,000 Facebook feeds
• 368,000 tweets
• 3 blog sites led to 195,264 visitors to adidas & Messi sites
• Strong feature on key social networks – Facebook, YouTube & Twitter
• 93% of all traditional media coverage was positive
• Coverage in traditional media Television, Newspapers & News Websites
• The BBC News website featured a photo report of the event
• Covered in 25 countries around the world
• Facebook and video demographics indicated that those most interested and engaged in the event were our core target audience, 91% Male, 43% aged 13-17 yrs
• 3.5 million young football fans saw the activity through TV & press
Execution:
The campaign was originally activated online five days before the event itself. Firstly an announcement was made through blogs and social networking sites that Messi was actually coming to London. The second stage of seeding included clues and tips as to the suspected locations Messi would be visiting. The day before his arrival, we widened the net and The Sun and Sky Sports revealed further Messi content and clues as to his likely whereabouts. As Messi touched down at Hackney Marshes, Sky Sports covered the event live online and via TV broadcast. Over the next few hours, Messi’s journey from Hackney Marshes to his final destination in Brick Lane, where he would take part in a boot amnesty with fans, was also shown live. By the time he arrived in Brick Lane, huge buzz had built up and he was received by an enormous crowd of fans.
The Situation: The world’s best and most famous football player, Lionel Messi, made a rare and fleeting visit to London providing an opportunity for adidas to generate a PR campaign associating him with their brand. The problem? adidas only had 4 hours in which to squeeze as much PR activity out of him and create a huge buzz amongst a notoriously hard to impress and engage 14-19 year old male audience, who couldn’t be reached behind their TV or computer screens.

This professional campaign titled 'The Messiah' was published in United Kingdom in July, 2011. It was created for the brand: Adidas, by ad agency: TBWA. This Ambient medium campaign is related to the Fashion industry and contains 1 media asset. It was submitted almost 11 years ago.