Why walk when you can ride? 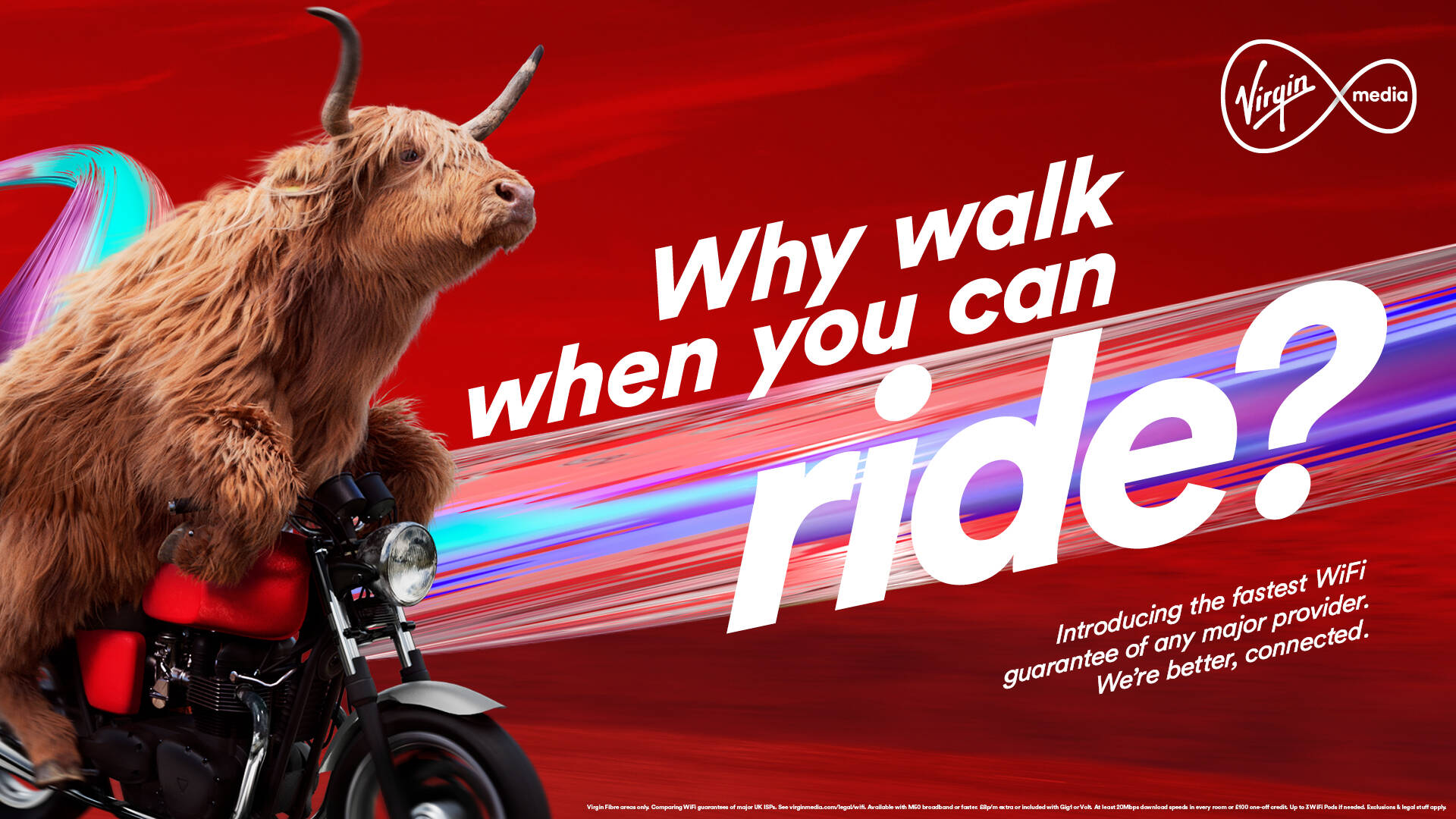 Virgin Media together with VCCP London releases ‘Why walk when you can ride?’ an integrated brand campaign to launch Virgin Media’s WiFi guarantee, demonstrating the internet provider’s commitment to delivering superior connectivity, reliability, and speed.

The light-hearted and playful campaign will roll out throughout the UK across multiple formats and leads with a hero 60” film, ‘Highland Rider’, directed by award-winning director, Jeff Low and will premiere during the England Women’s international friendly football match against the USA on ITV. Supported by a 30” spot, the film depicts the story of a highland cow who, inspired by epic biking scenes she's seen streamed over Virgin Media WiFi, goes to better and beyond by taking to the tarmac on a motorbike.

The cinematic TVC opens on a close up of a highland cow’s face, with a view of the Scottish Highlands landscape behind. As the iconic backing track from Dirty Dancing ‘She’s Like The Wind’ by Patrick Swayze begins to build, the camera pulls out to reveal an eye catching scene of the cow roaring along on a motorbike as she embarks on her own adventure. The viewer accompanies the ride with her for a while, and then, with the wind in her hair, she races off into the distance. The campaign strapline ‘Why walk when you can ride?’ voiced by celebrated actor, Peter Mullen, brings the film to a close and aims to leave viewers with the feeling of never settling for slow when you can have fast.

The new strategic and creative platform builds on Virgin Media’s existing market-leading speed credentials and bolsters its position further by highlighting its reliability credentials too thanks to the launch of its new WiFi guarantee – the fastest of any major provider. ‘Why walk when you can ride?’ celebrates Virgin Media’s promise to never stop in the quest to make things better for its customers, to challenge the status quo, and nods to their unstoppable spirit.

This professional campaign titled 'Why walk when you can ride?' was published in United Kingdom in October, 2022. It was created for the brand: Virgin Media, by ad agency: VCCP London. This Film medium campaign is related to the Electronics, Technology industry and contains 2 media assets. It was submitted 4 months ago.

Supercharge your world with Volt