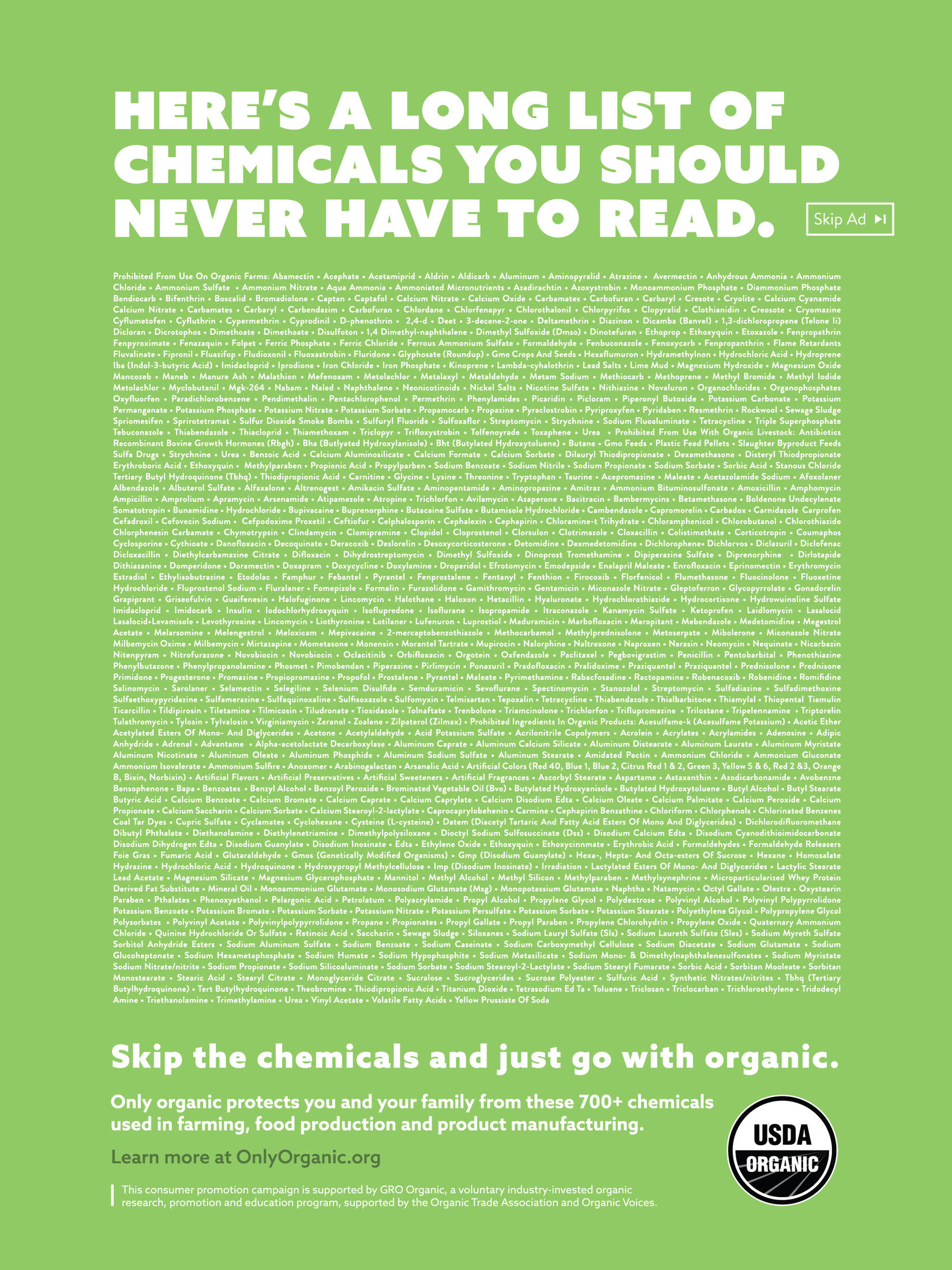 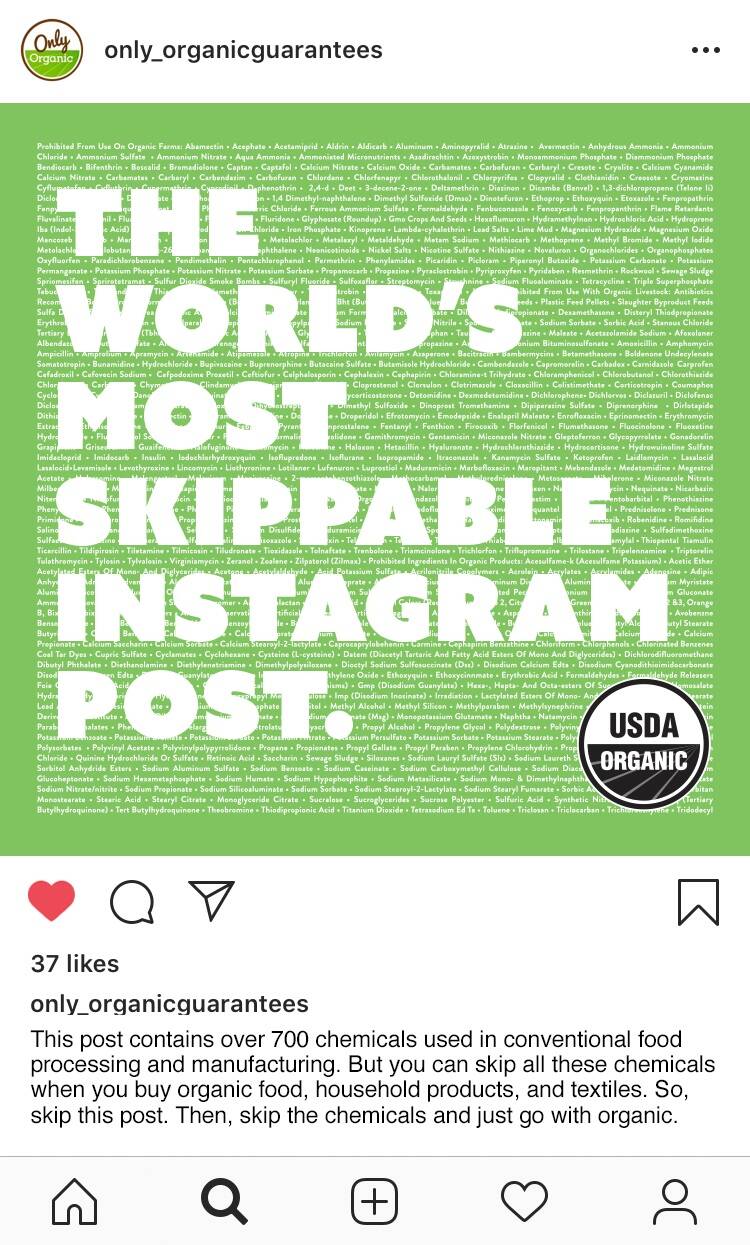 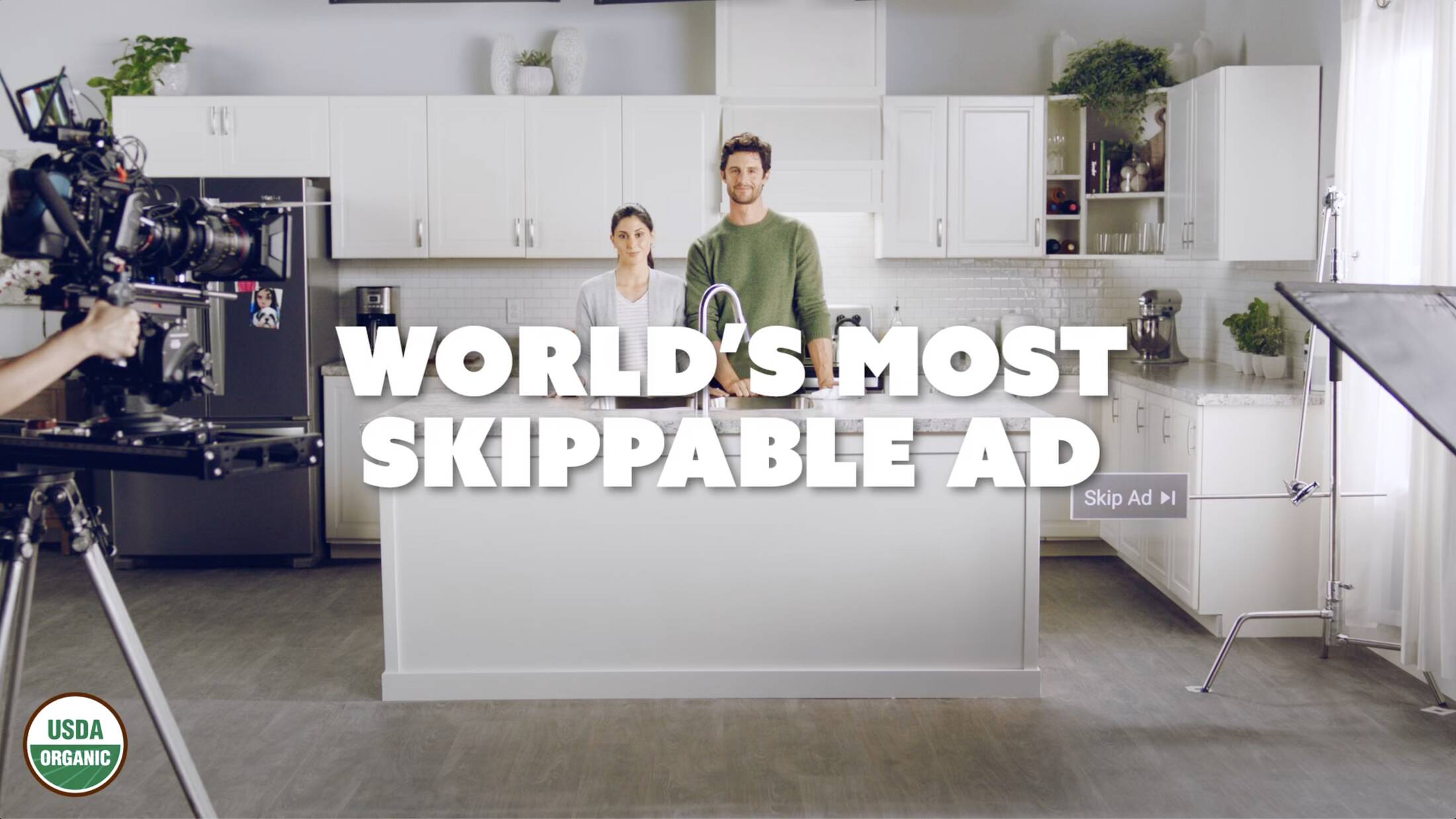 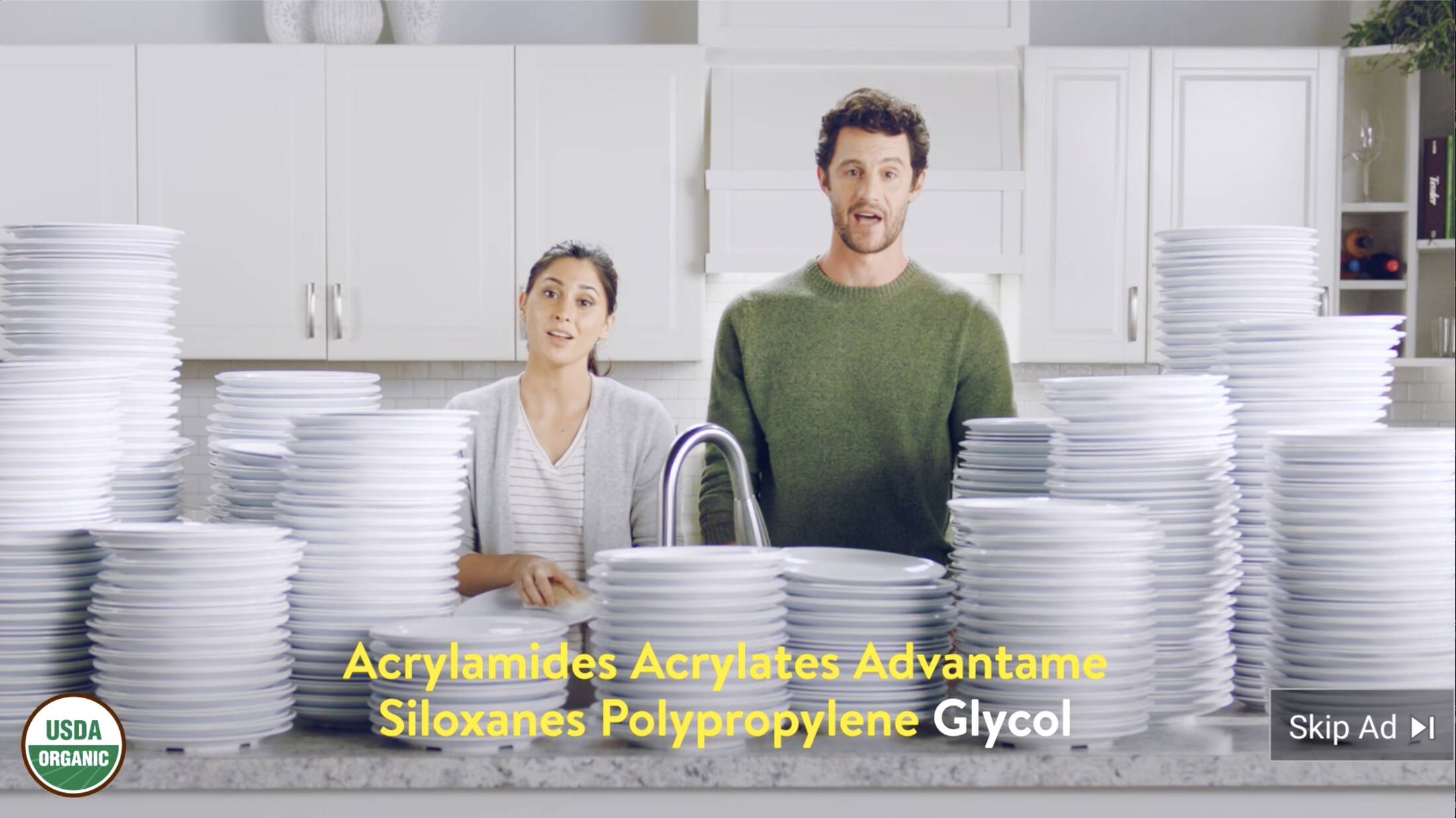 Creative agency Humanaut has devised an attention-getting campaign that employs reverse psychology for non-profit Organic Voices. The centerpiece is a bulky list of more than 700 chemicals that are allowed in conventional food processing and manufacturing. Viewers are told they can “skip” this ad and all of these chemicals—in rather entertaining ways—and go with organic when shopping for food, household products, or textiles.
In a rare show of unity from a single industry, more than 100 brands and like-minded organizations from the organic sector and beyond including Amy’s Kitchen, Applegate, Organic Valley, Lundberg Family Farms, and Stonyfield Organic have come together to support the campaign and its message: skip the chemicals and just go with organic.
To launch the campaign, Humanaut created “The World’s Most Skippable Ad,” an over 30-minute video that will run as pre-roll on YouTube and other skippable environments. The ad features two parents washing dishes while literally singing over 700 chemicals, in show-tune style. Throughout the ridiculously long video, the couple urges viewers to skip the ad and the long list of chemicals and to just buy organic instead.
“It was very hard to make this ad that we didn’t actually want people to watch,” said David Littlejohn, co-founder and chief creative director of Humanaut, recalling the rigors involved with writing, singing, accompanying and recording the extremely tedious original-music piece. “The campaign focuses on one thing: the sheer volume of chemicals that organic protects you and your family from.”
Gary Hirshberg, chairman of Organic Voices and founder of Stonyfield Organic added, “Americans should not have to read a long list of chemicals on the back of their products and wonder if any will cause harm to themselves and their family. We want to make it simple: you can skip this long list of chemicals and just go with organic.”
All components of the multimedia campaign—from video to OOH posters to digital, social media and more—feature the list of chemicals and emphasize the message that you avoid all of them when you buy organic. For instance, the super-long website, SkipTheChemicals.com, seems like a never-ending scroll. If the viewer persists down the list, pop-ups ask if they are sure they want to continue scrolling and lets them know they don’t need to continue, with messages such as “Maybe you missed the whole point of this website” and “Are you okay? We’re getting concerned.” appearing. The messages increase in speed and absurdity the longer one scrolls. The site threatens to “launch 23 pop-up ads” and at one point, it appears to become sentient.
Companies don’t need government approval to add most of the chemicals that are used in conventional packaged food: Many are deemed “safe” by chemical companies, food companies or industry trade associations—not independent experts. But some, including sodium nitrate, butylated hydroxyanisole, and glyphosate have been linked to serious health issues. In contrast, federal regulators and independent experts are required to screen any ingredients before they are approved for use in organic packaged foods.
This project is part of Humanaut’s ongoing mission to get good things inside people’s brains. The campaign was produced in-house in the newly built Humanaut film studio in Chattanooga. Humanaut is a project-based advertising agency and brand production studio working with emerging brands and companies that are making things better for people, animals, and the planet.

This professional campaign titled 'Skip the Chemicals' was published in United States in October, 2019. It was created for the brand: Organic Voices, by ad agency: Humanaut. This Integrated medium campaign is related to the Public Interest, NGO industry and contains 7 media assets. It was submitted over 3 years ago.

The World's Most Skippable Ads