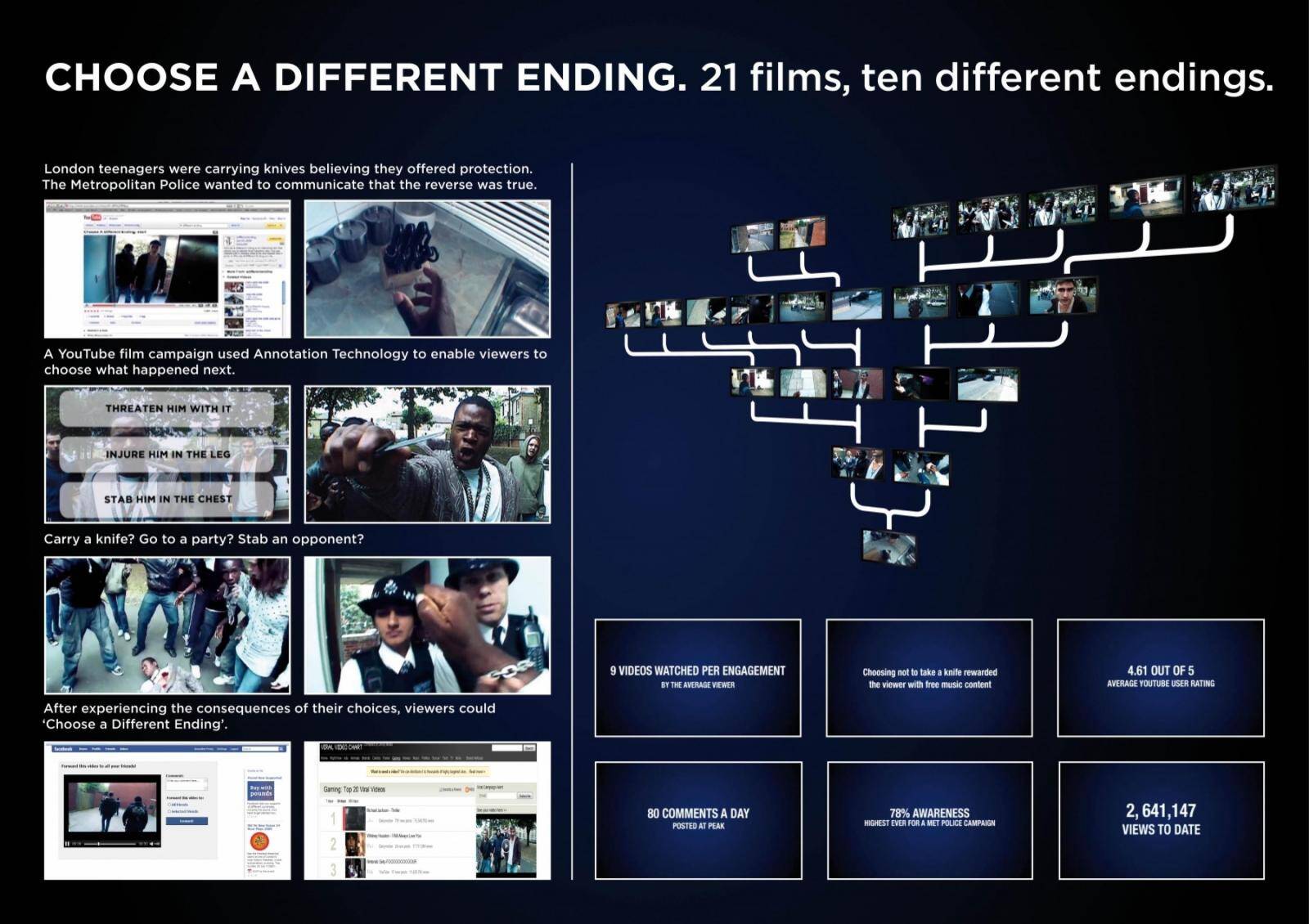 Describe the brief from the client: The Metropolitan Police wanted to demonstrate the consequences of carrying knives. More and more young people were carrying knives in the mistaken belief that this would protect them. The agency were asked to create a campaign to show that the reverse is true.
Creative Execution: The campaign was seeded online and by mobile phone before employing social media, search media, posters, in-game posters, blogs, posters, radio and TV. ‘Choose a Different Ending’ appeared on Youtube, unbranded, as an interactive film. The campaign drew an immediate response. Unprompted, forum members compared the choices they’d made and the consequences that followed.
Describe the creative solution to the brief/objective. Our idea was to create a campaign that involved our teenage audience, enabling them to make choices and in doing so, directly experience the consequences. A film campaign was created for Youtube, putting the viewer in the position of a teenage boy on a London estate. Each film ends with an invitation to choose what happens next. Once a viewer has concluded the path they have chosen, they’re invited to ‘Choose a Different Ending.’ An ending both for the film, and for their life. 21 films, ten different endings.
Results and Effectiveness: 4.6 out of 5 average user rating. • 2.1% click-through rate on viral video trailers, well above 0.2% industry benchmark for rich media banners. • Net number of views logged would have required a TV budget 600% the size of our spend. • Peer-to-peer debate about the videos and knife crime swelled. At peak, more than 80 comments a day were posted, with a total of over 3,000. • Total views to date, 2,652,012. • Highest total recall of any Metropolitan Police campaign, ever. 78% among our target.

This professional campaign titled 'Anti-Knife Crime Campaign, Choose a different ending' was published in United Kingdom in June, 2010. It was created for the brand: The Metropolitan Police, by ad agency: BBDO. This Digital medium campaign is related to the Public Interest, NGO industry and contains 1 media asset. It was submitted over 12 years ago.

Look up. Look out.